Home » About Us » Pupsicles

Pupsicles
During one of our regular visits to the Montgomery County show, in Pennsylvania, a fine upstanding dog caught our eye. 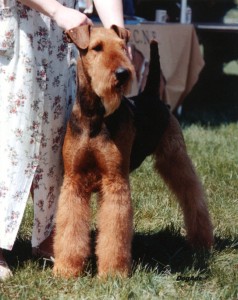 That dog was Am Ch. Highpoint’s Dakota (left)and we decided we would like to use him to introduce new blood to our lines. We attempted this by bringing frozen semen from ‘Dakota’ to England to produce puppies by artificial insemination. This would prove to be the first time this had been acheived in Airedale Terriers in the UK.

We applied to the English Kennel Club for prior permission as required, and permission was duly granted to inseminate two bitches; Shadlian Uessay 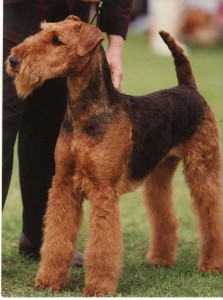 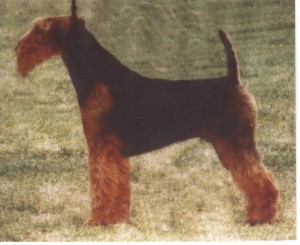 Sally (Shadlian Uessay) was the first bitch in season and on the 10th May 1999 she gave birth to 5 PUPSICLES, three girls and two boys.

Of these pupsicles:-
‘Cece ‘ (Shadlian High Tea) went to the USA to begin a show career with Dick Leslie (Highpoint) who co-owned Cece’s father Highpoint’s Dakota. Her little brothers and sisters remained in England. Webster (Shadlian Aimin’ High for Daedal),see below, 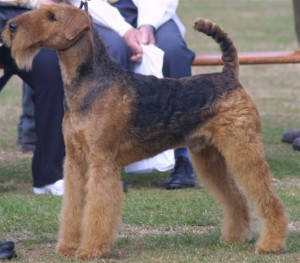 went to Rodney and Isobel Eastall and enjoyed a very successful show career over a number of years. 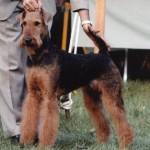 went to the USA to begin a show career with co-owner of Highpoint’s Dakota, Diana Dozier, and lives in Seattle with her co-owner Abbe Stashower. She became a Champion with 3 majors during 2001.

We were in Cleethorpes today and I spotted a very handsome Airedale dog (Teddy) I asked who the breeder was and I was told it was you. I have had 6 Airedales and I love the breed and I am considering getting another to go with the chocolate Labrador that we rescued 4 years ago. How much are your Airedale puppies and when do you have a litter due. I bought my last Airedale bitch from Sylvia and John Hicks at Jonvias. I have known them both for many years (work colleagues) she was my first bitch and I would never have another dog after having the privileged to own her, a sad loss at 8 years old to a blood disorder; Sylvia and John are no longer breeding them.
I look forward to hearing from you
Kind regards
Tricia
Vazon bridge House
Keadby