Home » About Us » Overseas

Dogs Overseas
In 1986 Shadli Fantom went to America as a champion. He was campaigned to his American Championship by Rose Richards of Blazoncrest Airedales and went on to sire many lovely puppies. During 1988 Shadli Manipultor at Jokyl(“Nip”) and Shadli Lord Luke both gained their Italian championships and were battling in 1st and 2nd places for honour of Top Airedale in Italy. They were owned and campaigned by Giulio Audisio Di Somma and Eliano Matteucci respectively. Around the same time Lord Luke’s litter brother “Matt” (Shadli Likely Lad) went as a champion to live in Denmark with Inge Hansen and Mikael Laursen of Spicaway Airedales where he attained his Danish Championship and was top Airedale in Denmark.

In 1995 one of Tessie’s sons, ‘Stolie’ (Shadlian Ben Nevis), went to live with Rose Richards (Blazoncrest) in Southern California and was subsequently campaigned to American Champion.

In 1996 Sally’s sister, Alice (Shadlian Majestyk Jan) went to live with Lorene and Jim Hunt of Majestyk Airedales in Texas and Alice started her show career with Best Bitch and Winners Bitch.She went on to produce champions in America.We decided it would be nice to mix american blood with our lines again so in 2005 we imported Alice’s grandaughter,Tula(Shadlian Texan of Northstar)  from the Northstar kennel of Pam Macomber in Texas.Tula(TartanScottshire Ultraglide X Majestyk’s Northstar Talon) is much loved and continues to produce nice puppies for us here in England.

In 1998 ‘Paul’ (Shadlian Yorkshire Lad) went to live in Japan as a puppy with Yoshinobu & Chikako Kimura and is now a Japanese Champion. 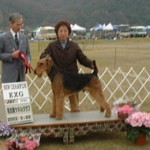 Later that year Paul’s litter sister Tilly (Shadlian Mai Tai) joined him in Japan when she went to live with Mr. Nomura who campaigned her to Japenese Champion.

In October 1998 ‘Jamie (Shadlian Agent Provocateur) went to live in Northern California with Anna Carson. Jamie has been campaigned by Anna with much success. 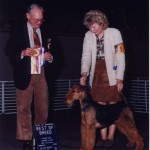 ‘Totty’ (Shadlian Territage Ducati) went to live in Colorado Springs. Jay and Pam DeTurk took her home with them after their visit to the Airedale Terrier Millenium Celebration in Bingley during June 2000.

In 2000 we had the pleasure of delivering two Airedales,Shadlian Iced Tea”Molly” (a pupsicle)  and Brick (a Billy pup),to Roxan Kynas in Barbados. 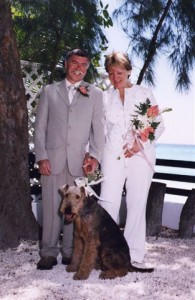 We have been firm friends ever since and in March 2003 Keith and I got married in Barbados after 10 years together and Molly(left) kindly consented to be our bridesmaid.

In May 2006 we exported a bitch called Lady to Athens. 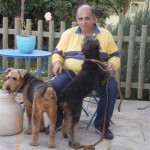 They loved her so much that two years later in August 2008 they asked if they could have a companion for Lady and we had no hesitation in sending Shadlian Cheeky Charly “Charly” to them.See them right with dad,Panagiotis.

In September 2006 Anna Tokareva and Dennis Cukr visited us from Russia and returned to Moscow with their puppy Shadlian Oil Guy “Otis”(left). 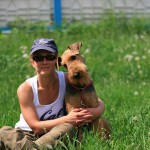 He did extremely well in the show ring there then continued his winning ways when they all returned to Houston,Texas where he became a US Champion. 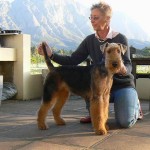 In August 2007 Liz Atkins came to England to collect Shadlian Borrowdale “Matty” then returned home with her to South Africa where she is enjoying life with Liz,her husband and their other dogs.