Home » About Us » Beginning

A New Beginning
After a long lay off due to a protracted divorce, in 1993 I met my new partner Keith Raper and together we have built a successful breeding showing kennel under the affix of “SHADLIAN”.We have enjoyed much success including many Best in Show,CC’s,RCC’s  and Best Puppy awards leading to attainment of Kennel Club Stud Book entries. 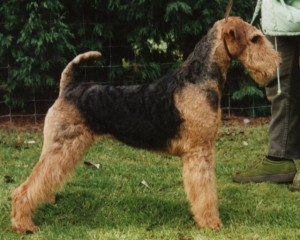 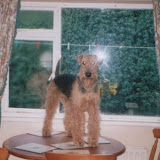 We have also campaigned Sally’s brother, Billy (Shadlian Red Sox) to 2 RCCs in 1997.(See him left displaying Airedale Terrier characteristics!)We enjoyed many happy years with Sally and Billy until both sadly passed away within five weeks of each other in 2008.They both,together with their younger sister Tiga (1997-2009) were an absolute joy to live with all full of Airedale Terrier “character” !!! 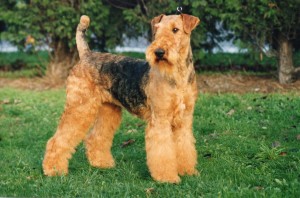 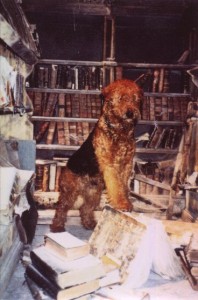 His name was “Jake” (see him right in Cruella DeVil’s library)and he went on to become the hero of the Disney movie “101 DALMATIANS” and left us to live in luxury with his animal trainer from the company,Birds and Animals Unlimited, on a ranch in Florida.Another of our dogs “Tex” involved in the same film at Shepperton Studios went off to live with one of the producers and her actor husband.Tex hasinc passed away and in 2008 puppy Mabel(Shadlian In The Pink) went to live with them.

In 1999 we pioneered the use in England in Airedales of artificial insemination using frozen semen.We imported frozen semen from Am Ch Highpoint’s Dakota

(below) to be used on Sally and Tiga.More of which later.

In 1998 we constructed purpose built dog boarding kennels to be known as “Woofers Lodge” which we developed into a very successful and highly recommended boarding and  dog grooming business.We sold the business in 2005 to concentrate on breeding and showing our dogs,which we had been unable to do in the intervening period due to the commitment required in running a busy boarding kennel.

Just wondering if you sell frozen semen, importing to Australia. We seem to have limited bloodlines, and quarantine is very strict and prolonged in Australia, so it would seem importing good dog semen is a good option.

Any information on experience, costs, your dogs, would be helpful.

Are there Airedales from Jake’s line being bred in Florida? I just had to have my brilliant Airedale Beau euthanized. So smart he seemed part human. I eventually want another to train. He could count to 5 and 10 and would yawn when I asked him what he thought of David Letterman.I live in Bradenton, Florida.

Hi, don’t know if you’ll remember me, I had Trafford, who breed with one of your dogs. From the litter you kept a puppy, I think you called Harley? I’m looking to get another Airedale and would love one down Trafford”s line. I just wondered if you could help me?